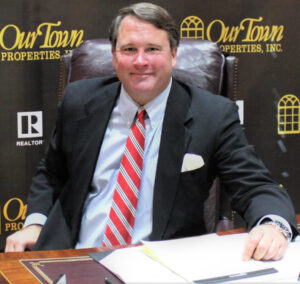 BRADLEY B. EAGLES is a native of Wilson North Carolina and a graduate of Greenfield School.  Bradley moved back to Wilson, North Carolina in 2003 after living in Raleigh for seven years. While there he attended and graduated from North Carolina State University. In his senior year he established Eagles Properties where he gained three years of real estate sales and management experience. During that time he obtained both his salesman's and broker's licenses.  He also received the Broker-In-Charge certification from the NC Real Estate Commission. In addition, he is a licensed North Carolina General Contractor. Bradley is proud to be associated with Our Town Properties, Inc. and has been very active in Real Estate sales through the years with Multi-Million dollar production making him a TOP PRODUCER!

Bradley is a member of the Wilson Board of Realtors of which he was the Past President, a past member of the Home Builders Association of Wilson, the Greater Wilson Rotary Club where he served on the board of directors, Duck's Unlimited and is a proud member of the First United Methodist Church. He earned the rank of Eagle Scout and has been involved in the past in the scouting program.

Bradley has two children which are the apples of his eyes; 13 year old son, Bradley Burwell Eagles Jr. (Wells) & an 11 year old son, William Carr Eagles (Carr).  Bradley’s enjoyment comes from spending his free time with them both rarely missing a sporting or school event.